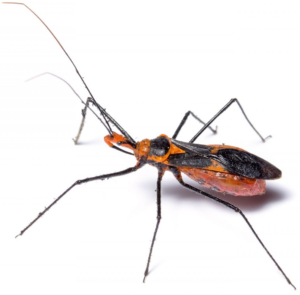 What is Chagas Disease?

One of the more serious threats to dogs in Texas is a very little-known disease called Chagas. It is a disease that has been increasingly diagnosed in Texas dogs and humans. It was named after a Brazilian physician, Carlos Chagas, who discovered the cause of the disease, a single-celled protozoa (microscopic parasite) named Trypanosoma cruzi. The organism lives inside an insect called the kissing bug (Triatoma), named because it often bites people around their mouths. The insect sucks blood and then defecates (has a bowel movement) around the wound in the skin. The protozoa then have a way to get into the bloodstream and establish an infection. Dogs can also become infected by eating the kissing bug.

In the early stages of Chagas disease, dogs may have a fever, lack of appetite, feel weak, have swollen lymph nodes, a swollen liver or spleen and possible early heart disease. In the later stages, dogs may develop heart failure. The heart condition is called cardiomyopathy, a syndrome in which the heart muscle weakens and the heart chambers become dilated. At any phase of the disease, dogs are at risk for sudden death. The diagnosis is often made by combination of the history of possible exposure to the kissing bug, a physical exam, radiographs (X-rays) of the chest, an ultrasound of the heart and blood test to confirm the presence of antibodies to the disease. While there is currently no cure for Chagas, treatment is aimed at trying to strengthen the weak heart and providing supportive care for the patient. Unfortunately, the prognosis is guarded for long-term survival. Puppies as young as six-months-old have been seen with late-stage heart disease.

Preventing Chagas in Dogs in Texas

Most of the cases that have been diagnosed involve pets that live outside, underneath a light that is on at night and possibly close to stack of wood or native brush such as Mesquite trees in Texas. The bugs live in the wood crevices and are attracted to the light. They often fall down onto a sleeping dog and are able to get a blood meal. Therefore, prevention consists of keeping your pet in an area that is free of the kissing bug, such as inside the house or garage, under a covered patio or other areas where the bugs do not exist. The removal of stacks of wood and placing kennels away from brush and outdoor lights is also important.

Although direct transmission from dogs to humans has not been reported, the increased infection in dogs may indicate the local presence of the kissing bug, which may pose an increased risk to humans. This little-known disease is making its way into the U.S. Especially in South Texas, it is trying to make a bigger name for itself, but hopefully we can try to prevent Chagas until a treatment is available or a protective vaccine is developed.